The Story of Ernie, Boston Terrier – Bitten by a Rattlesnake!

Ernie, a smart, sweet 2-1/2 year old Boston terrier (shown left), was frolicking in the cut green grass of his fenced backyard. It was August 2017, summertime in a pretty rural valley on the route to the Grand Canyon, in mountain high country near Williams, Arizona.

Ernie’s human “daddy,” Tim, suddenly heard a loud “yelp.” He ran outside to see Ernie jumping erratically in place, just off the patio, alerted to something beneath his feet. Tim scanned the area and saw nothing, but knew his little dog was in trouble. Soon, Ernie began acting strangely, almost as if in a state of shock. I was busy inside the house, but Tim called to me right away, saying, “Ernie is hurt!” I immediately thought it was a sting from a yellow jacket or wasp. There were lots of them buzzing about near the back door all afternoon, sometimes coming inside when the screen door opened. Perhaps he was having an allergic reaction.

We called the nearest veterinarian and they first recommended Benadryl (thinking it could be a reaction to a sting) and advised us to take Ernie to the West Side Veterinary Clinic in Flagstaff as soon as they opened in morning. There was no real thought that this could be a dire emergency—at least not yet. Ernie was conscious but his leg was starting to swell. Then he began to slip in and out of a strange, half-sleep, half-delirious state and remained that way throughout the afternoon and into the evening. By morning, his teeth were tightly clenched and he had a terrible instance of shooting diarrhea. We got to the West Side Veterinary Clinic right when they opened. It didn’t take the doctor long to tell us what happened: Ernie was bitten by a rattlesnake! 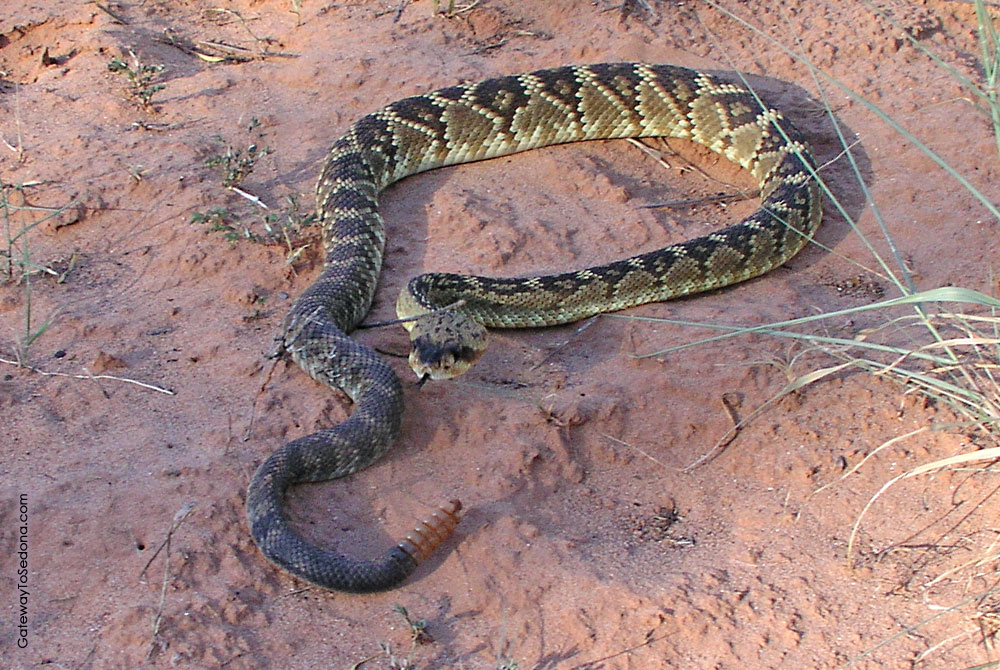 Above: The black-tailed rattlesnake is one of several rattlesnake species common to Northern Arizona.

What? No way! Tim never saw the snake, even after combing the area. He was on the scene as soon as he heard Ernie cry. Plus, Tim had never seen a rattlesnake anywhere on the property in over 10 years.

WATCH THE VIDEO: Click the “Play” button on the image above.

The Westside Veterinary Clinic immediately administered rattlesnake antivenin, pain killers, and monitored Ernie for the rest of the day. At closing time, we picked up Ernie to transfer him to the Veterinary Emergency and Specialty Center of Northern Arizona located in Flagstaff. Known as “VESCONA,” they offer the benefit of a veterinarian on staff 365 nights a year, weekends, and holidays and are highly experienced in treating a wide range of pet emergencies.

Dr. Ayman Wassef, Medical Director of VESCONA, coordinated Ernie’s treatment. They began treating him immediately, administering doses of antivenin and then conducting a battery of tests. Ernie would remain a hospital inpatient for the next 3-1/2 days.

The major problem with a rattlesnake bite is internal damage and hemorrhaging—without antivenin to counter the effects of the toxin, dogs, especially a small dog like a Boston Terrier, is overwhelmed by the damaging effects. Antivenin is also extremely expensive, costing almost $800 per dose (the cost in Northern Arizona—it can be almost twice as much in other places/states).

We drove the 30 miles to Flagstaff from Williams on Saturday evening to visit Ernie, speculating along the way if we would possibly have to make a terrible decision. We wondered if Ernie would ever be normal again, let alone survive. Also—and difficult to contemplate—was the extreme expense of treatment due to the need for multiple antivenin injections. We arrived at VESCONA and worried in the waiting room. The doctors brought Ernie in, and much to our surprise, he was wide awake and very glad to see us. He seemed so much better than we imagined! At the same time, we could see he was in terrible pain whenever he was moved, despite the fact he was on strong pain killers, including a Fentanyl patch. The swelling had taken over his entire underside along the full length of his body! We had never seen such awful swelling, especially on such a little dog. The veterinarians had found the puncture marks too. When they closely shaved the leg hair to treat the area, there were two distinct, closely placed punctures, indicating a bite from the worst kind of rattlesnake—a baby rattlesnake!

When an adult rattlesnake bites, it normally delivers just enough venom to paralyze small prey like mice. It would be a negative survival strategy if the snake released more than required, since it needs to retain venom for the next meal. However, a baby rattlesnake doesn’t yet have the muscle development in place to restrict venom release upon striking, and so it releases its entire payload. A bite from a baby rattlesnake is especially dangerous for this reason.

And there’s more. An article from Desert USA states: “Rattlesnake venom also contains neurotoxic components which immobilize the nervous system, affecting the victim’s breathing, sometimes stopping it. Most rattlesnakes have venom composed primarily of hemotoxic properties. Baby rattlesnakes and the Mojave rattler are the exception; they have venom which contains more neurotoxic properties than hemotoxic which makes them very dangerous.” (Link: https://www.desertusa.com/reptiles/rattlesnake-bites.html)

In the end, a total of 5 antivenin treatments were required before tests indicated that Ernie’s blood was returning to normal. Maybe he was “out of the woods,” so to speak, but his trial wasn’t over. We took Ernie home on Monday, but soon the painkillers were either wearing off or not working enough. He screamed in pain whenever we tried to move him. He didn’t want to eat and barely had any water for almost two days. Then, slowly, he started to feel better. He returned to eating and drinking and his pain seemed to subside.

Finally we could remove the Fentanyl patch, and put new bandage wrapping on his leg. Things were looking up and it seemed like Ernie would recover. However, the next challenge of a rattlesnake bite was just beginning: the skin “sloughing” stage.

The reason the pain from a rattlesnake bite is so severe is because the tissue—skin and muscle— at the bite site is being slowly “digested” and destroyed. Dr. Wassef had warned us this would happen, but we had no idea what this really meant. Not only did the surface skin slough off, but almost to 1/2 inch INTO the thigh tissue; it became dead and in some spots, gangrenous. Now it was back to VESCONA, this time for surgery on Ernie’s leg to remove the dead and dying tissue. After surgically cleaning the wound, Ernie was left with a massive crater in his inner thigh.

After the surgery, we very carefully cleaned and dressed the wound twice daily, the possibility of infection always looming. At first, Ernie had to wear an “Elizabethan collar” to keep from biting at the wound, which he hated. After several weeks, what was once a huge, open mess, finally closed. Although the new skin is abnormally tight and some hair is missing in places, it is now remarkably healed and barely noticeable.

We were extremely fortunate for a number of reasons. First, we were referred to VESCONA. Dr. Wassef heads a top notch emergency medical team with experience in treating snake bites. Secondly, we were able to cover the expense of treatment, although at first it seemed out of the question. Even with the high cost, there are never guarantees. We heard one story where a dog owner spent over $12,000 to treat a rattlesnake bite only to have their poor dog die anyway. Decisions on whether or not to treat a dog can be daunting and heart breaking, and you can never predict the outcome. In our case, luck and heaven were on our side. Today, Ernie is his old self, or young self, you might say. He turned 3 years old on December 15, 2017, and is a bit of a celebrity. He is host of “Travels With Ernie” at Gateway To Sedona, and his photo has been published in the “AAA Travel With Your Pet” guide.

About the Author: Veterinary Emergency and Specialty Center of Northern